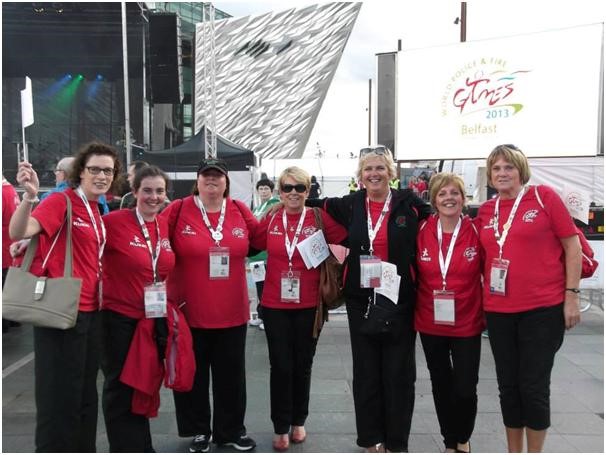 After a long wait and all the application forms were sifted through, interviews completed and the Volunteers were selected I received an email to say I was successful in my application and that I would be part of the Field of Play Volunteers based at the Beach Volleyball in Portrush. The next step was to attend an Orientation Event in the Kings Hall; I set off on the train knowing nobody, however was willing to make a few friends along the way. I was sitting on the train and overheard a conversation beside me between a woman and the conductor, the lady was asking which station she would need to get off if she were for the Kings Hall, and the Conductor replied Balmoral, after the conservation myself and another turned to the woman at the same time and asked if they were a WPFG Volunteer heading to the Orientation event. So from there a friendship was formed and the three of us headed to the Kings Hall. I knew then I was not the only person from Magherafelt area that was a volunteer, I had company for the day.

The orientation event was fantastic; the display of talent from the dancers (African and Indian), the entertainment Tim McGarry (Da), and the amazement of magic tricks from David Meade kept us all entertained and allowed us to meet fellow volunteers from across the world. We heard talks from Dame Mary Peters, Deputy Chief Constable Judith Gillespie, Police Service of Northern Ireland and some service men and women who would be participating in the games, for some Belfast was their first games and others having competed before, along with a few other speakers of the day. Our Uniform was unveiled and it started the countdown to the games for the volunteers.

Uniform collection day arrived, and after trying on many sizes of trousers to get the right pair for my short legs, I finally decided on the pair that was just right, and that was just the start of the uniform! Next came the t-shirt, however this time the sizes were less numerous and I found the one in a shorter time. Then came the hat, the bag, and the little notebook to keep us all right on the day, and not forgetting our ID Pass – Our entry for our selected events.

Then it was games day for me, up at the craic of dawn for yet again another train journey, this time to Portrush and again with no-one I knew, as my friends from Belfast were based elsewhere around Northern Ireland. So I hoped on the train to see some familiar red t-shirts and we all got chatting; we were all heading to Portrush. After the little trek across town (before many had surfaced – it hadn’t yet turned 9am!) to the beach we were greeted by the Event Organisers who organised all us volunteers in to teams where again I was thrown in with new people, some only down the road from me and we had never met before! (Northern Ireland is such a small place!). So again more friendships were formed.

Over the Beach Volleyball Events I was a ball fetcher, lines women and spectator during our breaks. One of the highlights was watching the Northern Ireland Fire and Rescue Service Men’s Volleyball Team. Neither of the two had picked up a volleyball before the event. They entered the competition for a bit of fun and comradeship and to meet their fellow fire and rescue personnel from around the world. The even brought their own toy mascot, Fireman Sam, who was their mighty sub when the going got tough! The weather was fantastic , not our typical Irish wet sunshine but the glorious temperatures and sunshine that you find in a foreign holidaying country, so out came the sun lotion however despite my best efforts I still came home after the event the same colour as my red t-shirt….

Next the closing ceremony, where our Portush Gang all met at the Titanic Slipways for the final farewell of the games. I had been selected to participate in the closing ceremony parade with fellow volunteers behind the flag bearers; this itself was an achievement as only a select few volunteers were allowed to participate. I then re-joined our gang and we watched as the 2013 World Police and Fire Games came to a close with the help of local musical talent and Cool Fm’s, Pete Snodden. A few tears were shed as the Friendliest Games were officially over and the flag was handed on to the Fairfax Games in 2015.

Now here’s a bit that I’ve kept secret throughout, I was also lucky enough to be working in a host village for the athletes and volunteers, so not only did I meet participants and volunteers at the events, I also met some in work and was able to cheer a few on in Portrush in my free time. As a result I made friendships and memories that will remain with me well into the future.

The World Police and Fire Games was an excellent volunteering opportunity; I met so many new people and made so many new friends. I would jump at the chance to be a volunteer again in 2015, who knows what’s in store over the coming years?

This website uses cookies to improve your experience while you navigate through the website. Out of these, the cookies that are categorized as necessary are stored on your browser as they are essential for the working of basic functionalities of the website. We also use third-party cookies that help us analyze and understand how you use this website. These cookies will be stored in your browser only with your consent. You also have the option to opt-out of these cookies. But opting out of some of these cookies may affect your browsing experience.
Necessary Always Enabled
Necessary cookies are absolutely essential for the website to function properly. These cookies ensure basic functionalities and security features of the website, anonymously.
Functional
Functional cookies help to perform certain functionalities like sharing the content of the website on social media platforms, collect feedbacks, and other third-party features.
Performance
Performance cookies are used to understand and analyze the key performance indexes of the website which helps in delivering a better user experience for the visitors.
Analytics
Analytical cookies are used to understand how visitors interact with the website. These cookies help provide information on metrics the number of visitors, bounce rate, traffic source, etc.
Advertisement
Advertisement cookies are used to provide visitors with relevant ads and marketing campaigns. These cookies track visitors across websites and collect information to provide customized ads.
Others
Other uncategorized cookies are those that are being analyzed and have not been classified into a category as yet.
SAVE & ACCEPT